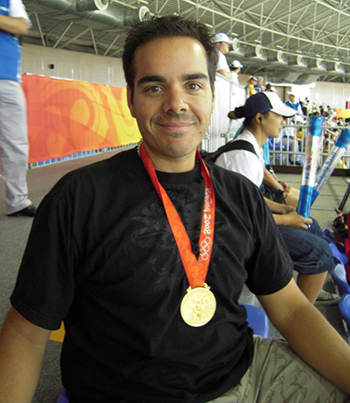 Double A Marketing’s founder Pete Dylewski has established deep roots in BMX and the Cycling Industry.

Pete discovered the sport of BMX at age 11, and has first hand experience in all levels of the Marketing chain from consumer to running a Marketing Firm.

Age 17 : Began to work in the industry – Summer Job at Cycle Craft – (at the time the largest BMX frame builder on the east coast) – position grew into Operations Manager. Worked at Cycle Craft for 2 years while attending College. Began dealing with sponsorship negotiations, team management, promotional programs and advertising.Also began to contribute photos and editorials to BMX Plus and BMX Today magazines.

Worked with Eric Carter as his manager and helped run his own Mountain Bike Program- Did all Duties from Team Manager to Team Mechanic. Also worked for the Mongoose BMX Team as their Manager for one season.

Pete branched out to work as the Marketing Manager for VSI Products and oversee the 5 brands the company manufactured- Intense BMX, Intense Tire Systems, THE Products, Vigor Helmets, and SINZ. Pete helped take this company from a start up to the #1 brand in BMX. Intense BMX become one of the most sought after brands in BMX racing and Pete helped launch the extremely successful line of Intense BMX complete bikes.

Pete began working as a sports journalist early on, writing for BMX Today and then as a contributor for BMX Plus magazine. This helped him move forward on the media side of things, as this experience helped him get asked to work with NBC Sports in Beijing during the 2008 BMX Olympics, as a researcher for the BMX event. From there, he began as the voice of BMX, for the broadcasts of the UCI BMX Supercross Events in 2009 and today is the host of the Live Web and Broadcast of the UCI Supercross race tour each season on BMXlive.TV

Working with one of the worlds top BMX racers, Christophe Leveque, the BMX Racing Group has become one of the key companies in hi-end BMX racing in a very short time.

Pete is the on air talent and commentator for live webcast and TV production on the UCI BMX Supercross Race series and Redbull Revolution Events.

Pete is also a Producer/developer of taped segments for the the Lane 1 – Inside BMX Supercross shows, that now air as well.

Pete still try to find the time to compete at USA BMX racing events on the National and local level to further help keep a firm hand on the current trends and grass root rider opinions within the sport.